It seems like I’ve fallen off the blogging bandwagon yet again! I really do plan to update this more often, but it definitely has a learning/commitment curve. Plus, as usual, I’ve been super busy. I know that seems kinda crazy, what with not working right now, but since my last post a month ago (yikes!), I:

So, without further ado, meet our little baby girl, Layla:

Dan took this pic when he was standing, which is why she looks so tiny

She’s actually not a baby. She’s about one and a half years old, she’s a pit bull and we got her from the lovely people at Save-A-Bull pit bull rescue group. It all happened in less than a week, which was super crazy, but we’ve had her for about 3 weeks now and things are starting to both settle down and get tougher with her. She is absolutely adorable and generally very well-behaved. She is house trained and mostly crate trained now, and doing pretty darn well on a leash too. However, they say that it is very common for adopted dogs to start getting comfortable around 3 weeks and to try to test their owners and we’re just starting to get a taste of that. Layla weighs 50 pounds and it is all muscle, so we’re really trying to work on getting her to do things because we ask her to, not because we force her to, since it’s pretty tough for me to force her to do anything. Overall, though she’s just a total sweetie and a complete cuddle monster. Here is a list of her likes and dislikes:

So there you have it. A busy “spring” and an adorable new buddy. Expect to see lots more of her in future posts!

Oh goodness, there are so many updates on the house and living in the area that I could write about right now. But as you may have surmised based on my lack of recent updates, things have been pretty crazy around here lately. Tons of projects around the house, school, holidays and cross-country road trips have kept me plenty busy. However, I managed to find a bit of time last week to make some baked jalapeno poppers. So as a quick post until I can get into more detail on what we’ve been up to, here is the recipe I used/modified for some delicious jalapeno poppers!

First, get some fresh jalapenos. Mine were on sale at Aldi, which initiated this whole adventure. I cut the jalapenos in half – you wouldn’t have to, but it does make the stuffing get crispy which I do think increases the deliciousness.

1/2 c diced onion (based on preference – this is a lot of onion, but Dan and I love onions and it gives the stuffing a nice texture)

Mix all of the stuffing ingredients together, stuff into halved jalapenos

Anyone who has ever rented, particularly in a college town or big city, knows the joyous experience that is moving day. Moving everything you own from one tiny, dirty place to another tiny, dirty place on what is usually a very-hot-and-sometimes-also-raining day. Not so for us this time around, folks! We had the luxury of taking as long as we wanted to move all of our stuff in the middle of the winter. And not to brag, but we also have a driveway AND garage in the alley. So we got to park our cars and van right where we wanted to instead of doing the whole “circle the block three times hoping a spot somewhere near your door opens up, then when it doesn’t,  park in front of the laundromat with your 4-ways on until a police officer on a bicycle shows up and threatens to ruin your day” thing. We also now live in a house instead of on the top of a 3-floor flat with a treacherous winding staircase. Thus, it is pretty obvious that although my legs are still covered in bruises, our most recent move was the best one yet.

I took one carload of stuff to the house each day and one trip with mom and her awesome minivan. Things were done at a reasonable pace and boxes were unpacked before the next load was brought over. Everything was peachy. And as promised, here are some pics of the new place:

Living room during the moving/unpacking process 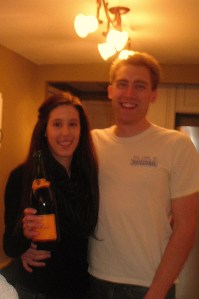 Celebratory champagne. Courtesy of Sg2 from my promotion

Dan installing new locks on the front door. What a handyman.

Today/last night we had a nice snowfall and I got to shovel out the house. Here is our winter wonderland and my handiwork.

Shoveled driveway – where to put the snow? The yard, of course!

Finally, as of right now, the place is without internet and will be for the next week-ish, so updates might be a bit slow, but rest assured that they will happen!

Closing day. You don’t have to go home because your new home is here (sung in my head to tune of Closing Time by Semisonic).

Yes, that is what went through my head all day on Monday, when we closed on our new house!!!

We had a few hiccups with work that was supposed to be done by the contractor before we closed, but everything got sorted out. The whole thing was very surreal.

Monday night my dad and I went to pick up a free couch, which meant he and I carrying a sleeper sofa out the basement door and up a snowy hill in the yard of a stranger. Everyone was really impressed with my amazing strength, but I woke up Tuesday morning feeling like I had been worked over with a baseball bat. So. Anyways. We got the couch and then mom, dad and I drove it to the new house, where Dan was waiting, since it is so close to his office!

We got it moved in and looks great. We showed Dad the place and had a few beers. All in all, a pretty nice evening.

Yesterday, Mom and I went over in the afternoon and I made her cover all of the shelves in the kitchen cabinets with shelf paper, because I knew neither Dan nor I had the required coordination or patience for the task. Today will be me doing another carload. The big move with the van will be on Saturday.  And as of Sunday, we will be officially moved in (we hope)!

Stay tuned for photos and updates!

Hyperbole and a Half

Ali on the Run

Living, running and kicking Crohn's Disease in the butt in NYC